Sony Electronics today announced its next-generation smart TV device, the NSZ-GU1 BRAVIA Smart Stick, making it easier than ever for owners of Sony’s 2013 TV line-up to discover and watch exactly what they want, from TV programming to apps and websites, all on one screen with one easy, voice-activated remote.

The BRAVIA Smart Stick features a slim form factor, 8GB of on-board storage, and plugs directly into the MHL port on the back of 2013 Sony BRAVIA TVs, with a USB cable to provide its power source. In addition, the BRAVIA Smart Stick comes bundled with Sony’s award-winning, voice-activated remote control, giving viewers a variety of ways to interact and control their entertainment. Priced at $149.99, the BRAVIA Smart Stick is available now at Sony Stores and select retailers nationwide. 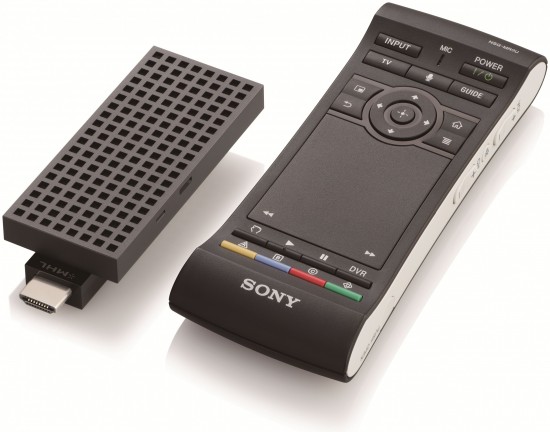 “The BRAVIA Smart Stick answers the question, ‘What’s on TV,’ with ‘whatever you want to watch’” said Jamie Marsh, TV marketing manager for Sony Electronics Home Entertainment & Sound Division. “It brings the full power of Google services to your TV. From the apps in the Google Play store to the power of Google search, the BRAVIA Smart Stick integrates seamlessly with Sony’s own BRAVIA apps and navigation to deliver an amazing connected TV viewing experience.”

Viewers can either type or speak into the included universal remote and enjoy the power of Google search for results from cable/satellite providers, the internet and apps. The BRAVIA Smart Stick also integrates a user’s existing cable or satellite service, so there is no need to switch inputs to enjoy content from either source.

The BRAVIA Smart Stick’s user interface seamlessly integrates Google and Sony’s own BRAVIA apps, allowing viewers to stay in a single menu to launch any of their apps, including BRAVIA apps like the Internet Video Library.

Out of the box, the BRAVIA Smart Stick is pre-installed with entertainment apps like Netflix, Pandora, Amazon Instant Video, Google Play, YouTube and more. Viewers can personalize their TV experience by adding video, music, games, social networking and news apps from the Google Play Store.

The BRAVIA Smart Stick’s user interface seamlessly integrates Google and Sony’s own BRAVIA apps, allowing viewers to stay in a single menu to launch any of their apps, including BRAVIA apps like the Internet Video Library.

Additionally, the BRAVIA Smart Stick’s Picture-and-Picture feature allows viewers to surf the web and watch TV at the same time in two independent windows on the television screen, without interfering with one another. Perfect for Fantasy Football, with one screen showing the game and another showing live scoring updates of your fantasy league, it’s also perfect for live tweeting or updating a Facebook status while watching award shows or other televised events and programming.

Intuitive Operation With A Remote Unlike Any Other

With a large, clickable touchpad on one side and a QWERTY keyboard on the other, the BRAVIA Smart Stick’s remote control is optimized for ease of use. Additionally, users can simply speak into the remote’s microphone to search content, apps, and the web.

The universal remote controls the TV, all of a user’s apps and even connected set-top boxes, and the clickable touchpad works just like a laptop’s, including one-handed operations like pinch and pull zoom control.