Vizio announced today the availability of its all-new 2014 M-Series Full-Array LED backlit LCD HDTV collection. Vizio offers a notable step up in terms of picture quality, offering consumers Full-Array LED backlighting and up to 36 Active LED Zones, more than doubling the amount when compared to the 2013 collection. The stunning picture performance of M-Series is complimented by a beautifully simple, smart TV experience with Vizio Internet Apps Plus, the brand's latest, most intuitive smart TV platform, and an ultra-slim frame design. 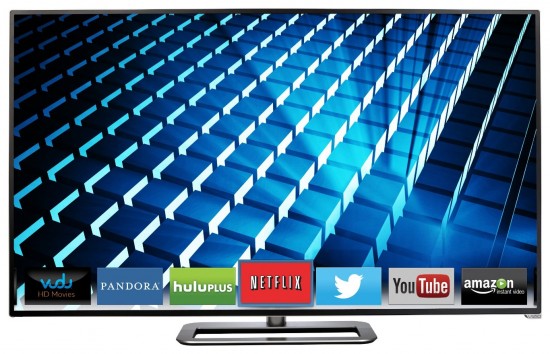 "The Vizio M-Series collection represents a significant milestone in picture quality for mainstream consumers," said Matt McRae, Chief Technology Officer, Vizio. "We crafted a best-in-class experience by increasing brightness, doubling the number of Active LED Zones and boosting the Clear Action performance. All this is coupled with our Vizio Internet Apps Plus platform for endless entertainment options."

Vizio's P-Series Ultra HD Full-Array LED Smart TV also captured Reviewed.com's 2014 Editor's Choice award and was also recognized by The Verge as "Best TV of CES" for 2014 as well as awarded "Best of CES" by Complex and "Best of Show" by Wired for 2014.

M-Series picture quality enhancements are paired with a premium Smart TV experience packed with endless entertainment options. Each unit is equipped with built-in Wi-Fi and features Vizio Internet Apps Plus, allowing consumers to access the hottest movies, TV and music on the web by easily browsing through a collection of their favorite apps such as Netflix, Hulu Plus, iHeartRadio, VUDU, YouTube and new to the mix, Spotify.

Vizio Internet Apps Plus also supports a seamless second screen interactive experience between phones, tablets and smart TVs. Supported apps like Netflix and YouTube allow users to play content from their mobile devices to the TV without missing a beat. The Vizio Internet Apps Plus entertainment experience is further enriched by a convenient smart remote with backlit QWERTY keyboard.

Featuring an ultra-slim frame that measures less than.3" thin on most models, the M-Series is easily the focal point in any consumer's entertainment space. With design enhancements like a premium metallic finish and ultra-narrow 8mm bezels that are up to 20% slimmer than last year's models, the all-new collection is beautifully finished with an elegant base design to bring a fresh touch into the living room.

The 2014 M-Series collection is now rolling out nationwide to in-store and online retailers like Amazon, Best Buy, Costco, Sam's Club, Target, Vizio.com and Walmart. Here are the prices: